A Last Hurrah Before Leaving—to VISIT the US 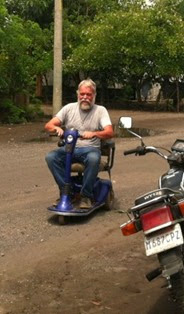 No, I’m not leaving Guatemala for good.  Only to come and see my kids/grandkids/brother/sister and visit with those of you who so graciously support us through your prayers and donations.
But this trip will be different.  Dick Rutgers is going to the States this Thursday and will be joining me in Omaha from Sept. 17 to Oct. 1, to help fill you all in on the work God is doing in Guatemala.
(For those of you who like to jump to conclusions, no big announcements are planned—except those that pertain to our common ministry.  Sorry to disappoint you romantic hearts among our readers!) 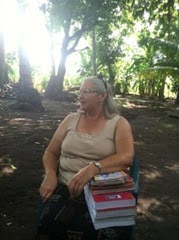 Dick had a few chairs which needed to go to the Escuintla region, and since there are no regular classes at the school this week, I decided to go with so he had an interpreter.  I’d not seen these families in quite some time. Since teaching in Santa Maria, I don’t get to travel near as often as I used to, so the timing was perfect. 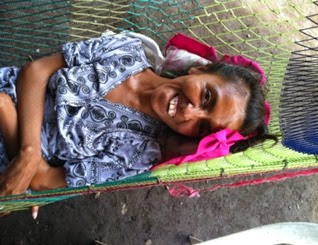 Our first stop was to see Paty, a 31 year old woman with cerebral palsy who I have known for three years.  Paty was laying in a beat up lounge chair when we found her, and Dick fitted her with a therapeutic chair which will recline to help position her properly when she is fed.  (Click here to read about our first meeting.)

A few weeks ago, Dick had visited and discovered that the cylinders which allowed the chair to recline had rusted up, not surprising in this area of high heat and humidity.  We brought new ones with us today to replace them.

When we arrived, we found Paty in her hammock, where she has spent most of her time since her chair has been out of commission.  It sounds pretty comfortable when you first think about it. . .lying in a hammock all day.  But imagine that the only thing you can look at for 12+ hours daily is the rusted metal ceiling above you.  Not so much fun. . .

Paty, who cannot move much on her own, was so excited to see us that she started bouncing up and down (as much as she could) in the hammock.  She has missed her chair greatly. 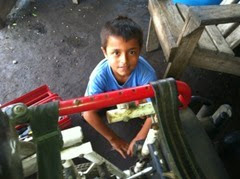 Dick had been saying on the way down that he would have liked to bring one of the guys along with us to help with mechanic-ing in the heat, but they all had school.  Well, Paty’s seven year old brother, Leonel, jumped right in to help, as did her dad. 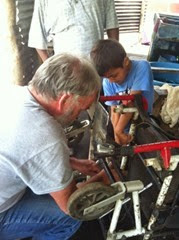 We faced a few challenges, as one of the new cylinders had frozen up, too.  But, with some machine oil the family had on hand to maintain her chair and some great team work on the part of the guys, coupled with a little bit of brute force on Dick’s part, they were able to get the cylinder moving once again.


The smile on her face and in her eyes confirmed for us that this trip had been a good idea.  Another month in her hammock would have been a strain on both Paty and her loving family. 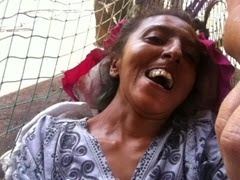 While I was there, I showed Paty pictures of the guys living in Casa de Esperanza and some of my family.  She began tentatively pointing to the camera, and I asked her if she wanted to take some pictures with my iPhone.  She managed a few selfies, and even some of her family.  She was so excited.  I really need to take her a communication book when we get back. 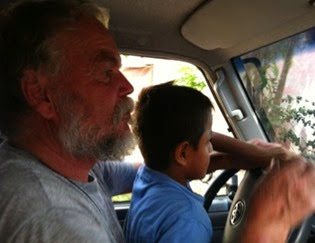 We invited Leonel to come with us to help with the other chairs we needed to take care of in Texcuaco, and he jumped at the chance to earn 10 quetzales.

Our next stop was to visit two brothers with Muscular Dystrophy who live in Paty’s community.  One is in a powerchair, and the other is using an electric scooter, since he refuses to even consider a chair.  His scooter had been in the shop for a couple of weeks, and out of commission for more weeks than that, so Dick wanted to get it to him before leaving for a month.

This young man (whose name I can’t remember for the life of me!) was beyond excited to get his chair back.  This is one of the few times Dick has ever seen him smile, and man was he!  He took off visiting neighbors as soon as he got in the scooter.  He had not really been able to leave his house for many weeks, and was so thrilled to do so. 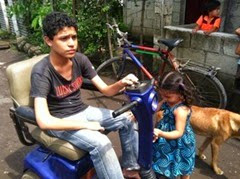 We left shortly, but not before promising to return in October to bring a new controller for his brother’s chair, since his had been malfunctioning intermittently.


We went on to visit their cousin Yelsin, who had been in a loaner chair for a few weeks, since his chair also had been in the shop.  He, too, has Muscular Dystrophy.  The mothers of all three of these young men are sister, and, as is so typical with MD, their sons have been affected by the gene they carry for the disease.

Yelsin was happy to keep the loaner chair, and Dick was happy not to have to switch out the batteries in the heat and the humidity, so we left him with the chair he had, and took the other back with us to give to someone else, probably another young man with MD.

We see too many of these cases here in Guatemala, often clustered in families and small communities, and I have to admit it is pretty heartbreaking.  The power chairs, however, give them their last bit of mobility as their condition worsens.  Though none of these three guys are in school (the school won’t let them go anymore since they can no longer hold a pencil or write), the fact that they can get out of their homes and move about their small community independently means the world to them.  This freedom greatly enhances their quality of life for how many more years each of them will live (most boys with MD die before their early 20’s), and the effort it takes to get and maintain these chairs is well worth it.

Our last stop of the day I think was my favorite.  While I loved seeing Paty, she was pretty much the same as always. 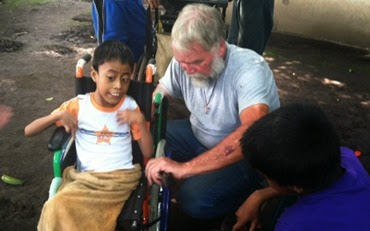 Marvin, however, was a joy to behold, seeing him active and thoroughly engaged in our conversations!  Each time we see him he has made so much progress, with only the “therapy” of the love and attention of his family.  They are very special to us. 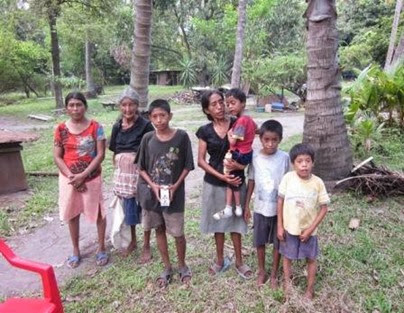 We met Marvin a about three years ago, when we were giving a chair to a girl in his community, and his mother came and asked if we had one for her son.  Crossing the road, we found a family which was literally starving, and a young boy with cerebral palsy.  Marvin was so scared of us, Dick could hardly measure him for a chair, and even when we brought one to him a few weeks later, he screamed the whole time we were seating him.

In the intervening years, we have helped find sponsors for the boys to continue their schooling, and Hope for Home Ministries has been providing monthly food baskets which Dick takes down when he visits them.

The health of this very poor family has substantially improved, though we still have some concerns about how skinny the middle son is.  We will probably take parasite medications to them again the next time we visit. Marvin’s Hope Haven chair had been broken, and once again he was confined to sitting on someone’s lap or lying in a hammock.  When he saw us coming, Marvin just about jumped out of his mother’s arms with excitement.  He knew our presence meant a new wheelchair.


Marvin is no longer afraid of us, now smiling and blowing us kisses.  He reaches out to us spontaneously, and is making more and more effort to communicate verbally.  He understands everything that is said around him, as evidenced by his strong “yah” when I asked his mom if he could see well enough to do some simple activities. (He has one severely crossed eye.  I talked with Dad about the availability of surgery at Hermano Pedro in Antigua which could correct this, and he is considering it.)  This little guy has truly become our friend, and we stand amazed at how is is progressing, with only the therapy of a loving family. 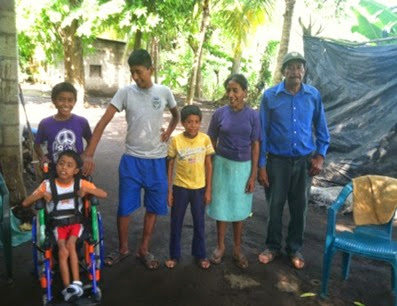 His three brothers continue their schooling, though each is struggling in some subject areas.  It is amazing, given the poverty in which they live, how important their education is to them and their family.

They would not still be in school, if not for their sponsors.  Your donations are making a huge difference, not just in their lives today, but in their futures.  In a country where most young men go after whatever jobs are available, these three have goals, and a plan for pursuing them.

Carlos, the eldest, will finish Third Basico next month, and wants to continue his education in agronomy—a very marketable skill in this area which grows sugar cane.  José, the middle son, would like to be a mechanic.  Antonio, the youngest, just wants to make it through school at this point, but his pretty young yet—only in fifth grade.  These are great kids, and they and their family wanted to make sure their sponsors knew how grateful they are for your help. José jumped right in to help switch the chest strap from the old chair to the new one.  He does have a talent for using tools.

While you might not be sponsoring these boys, please know that every family we visit asks us to thank their sponsors for the help they receive.  And, Dick and I sincerely thank you for allowing us to be the channel of your help to them.  There are so many times we need to turn away folks asking for help.  It blesses us and encourages us in our ministry to be able to help those you permit us to. 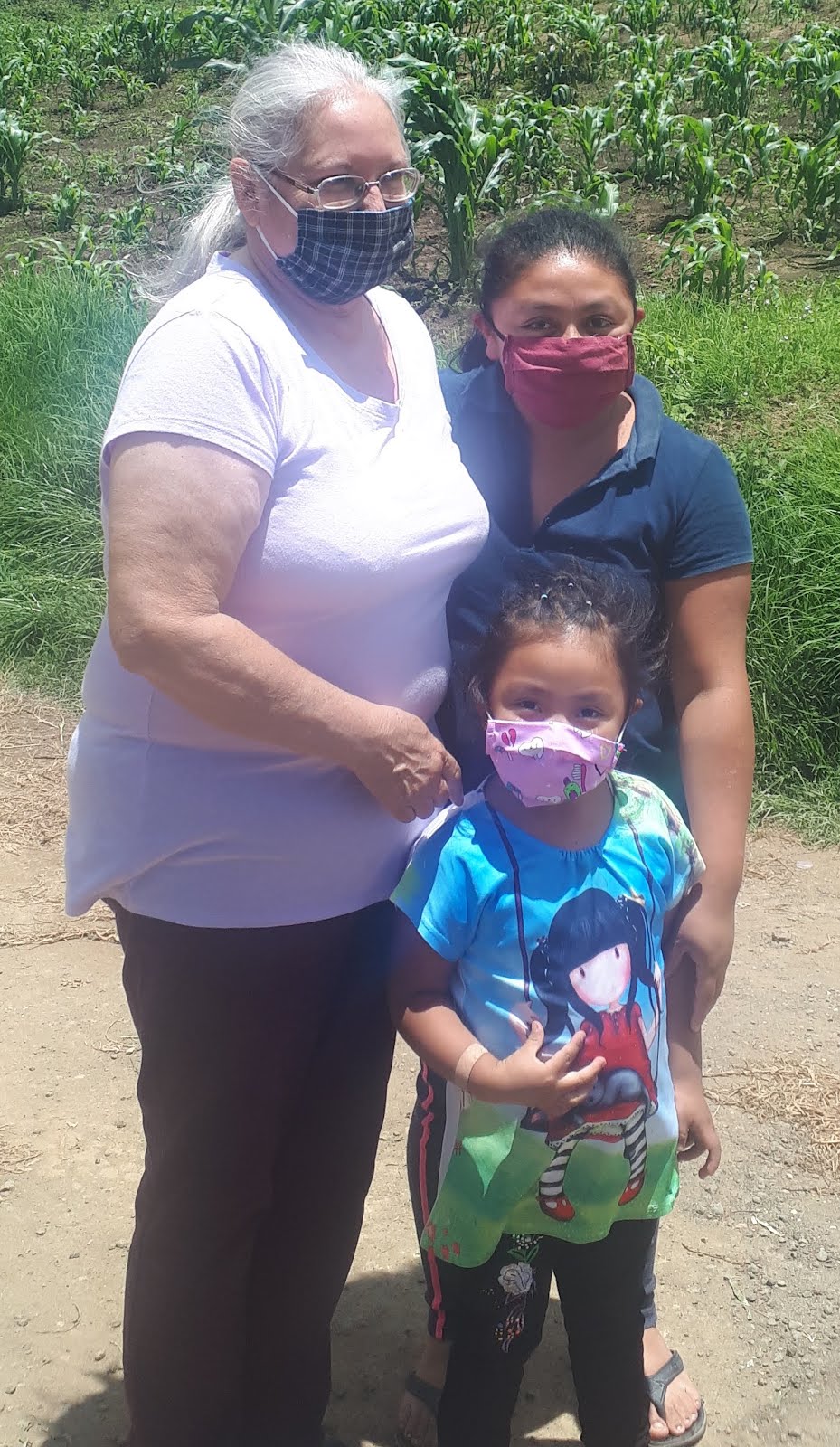 To glorify God by improving the lives of the poor and disable, now and for eternity. 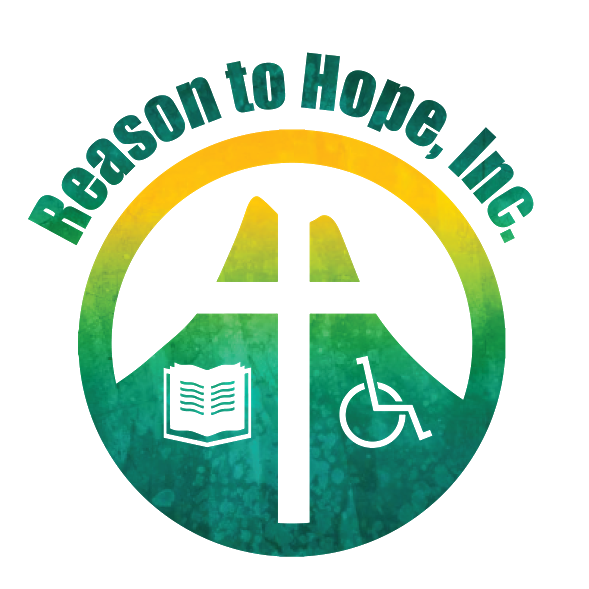 To support this ministry, go to:
Reason to Hope, Inc.