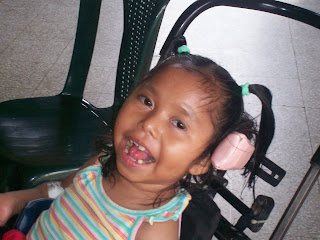 Today I finally got to spend the day with the kids at Hermano Pedro. I was walking around saying hello to the kids, and came upon little Brenda. As I said hi, and tried to walk by to see other kids, she quickly lost her smile and began to cry. All she wanted was a little attention, and was happy to be wheeled around with me as I saw some more of the kids. Shortly after I got there, Dick came in with Di, a nurse/paramedic from Australia who is down doing volunteer work in Guatemala. Di is a very interesting lady who has quickly become bored with the tourist activity of Antigua and was looking for something more challenging to do with her time here. Dick immediately invited her to go with us to Esquintla tomorrow to visit some families in that area.

It seemed that as soon as Dick got into the children’s ward, there were constantly staff members coming up telling him about one child or another who needed a chair fixed. His goal for today was to fix Fidel’s power chair, but before he got to that, he fixed a walker, two head rests and was told about a new boy who needed a wheel chair. How he manages to keep all this straight is beyond me. He even took time to show me how to fix a few things on chairs. He has much more confidence in my mechanical ability than I do, but, if I can tighten a few screws to keep things from totally breaking, and maybe lighten his load a bit, I guess it’s worth stepping outside my comfort zone. My biggest fear is that I’ll mess things us more than I’ll help, but I guess that’s how I’ll learn.

Dick also walked me through the process of signing out kids for lunch. Since there were only two of us here today, we could only take two kids. You could see the inner struggle Dick was having deciding who to take. This was one time I was more than happy to be “submissive” because then I didn’t have to carry the guilt of the sad faces of those who could not go. Moises had been promised a trip out a couple weeks ago, and then the orphanage was “closed” to volunteers and outings to keep out the swine flu. Today was the first day kids could go out, so Moi needed to go with us for sure. Henry was our second lunch guest. He’s a really bright 5 or 6 year old, who only recently returned to Hermano Pedro after being at home with his family for a number of months. Dick said he just doesn’t seem to be himself since he returned, so we hoped a trip out would cheer him up.

Our original plan was to go to Campero’s, but when Dick asked him if he wanted to have lunch at Camino’s Café (run by the church), Moi jumped at the chance. As we were walking there, Mark Richard, from Hope Haven Guatemala drove by, and decided to join us. With him was a gentleman (whose name I can’t remember, but you can feel free to fill in, Dick, if you do!) from Hope Haven in Rock Valley, Iowa. This is the second time I’ve met someone here in Guatemala who lives only about 2 hours away from me back in the States! They joined us for lunch and I got to hear a bit more about what Hope Haven International is doing here in Guatemala. 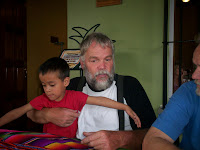 The boys had a chance to wheel around while waiting for our food and enjoyed the freedom. There was a little boy about 3 years old in the café, who you could see was fascinated by the boys’ wheelchairs, but was too timid to come over to them even with encouragement. Moi and Henry seemed to enjoy “showing off” for him a bit. When lunch came we all settled down to eat, though I think Henry was a bit disappointed that he got stuck with me helping him rather than Dick, but we managed. He did get to sit on Dick’s lap for a bit, and I think that satisfied him. 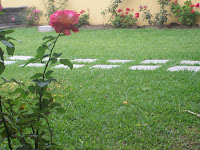 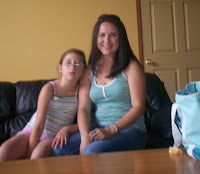 I told him he would have to ask her permission, and I swear he blushed. But he did, and she was happy to “pose” for him. We began talking and I discovered that Rosa Angelica was born in Antigua but was married to an American and has lived in San Diego for the past 20 years. She was interested in finding opportunities to do some volunteer work with her children (Lauren, age 10 and Christopher, 3) and was very interested in knowing more about Hermano Pedro. 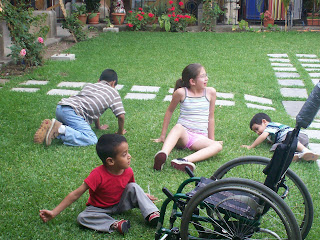 After he had his fill of photos, Moi decided he wanted to get out of his chair onto the grass in the garden area. Henry didn’t even have to think about joining him, and soon the two boys were crawling around and playing with Lauren and Christopher. It was a delight to see them interacting so “normally” with kids who could walk. And, to their credit, Lauren and Christopher seemed totally comfortable with the boys. A couple of times we had to reign in Henry because, though he’s only a couple years older than Christopher, he’d actually get a bit rough with him. If I didn’t know them, I’m not sure I would have been able to tell which of the four kids on the grass needed the wheelchairs. When we talk about “normalization” for individuals with disabilities, we get all technical and theoretical. This was real “normalization,” just letting the kids BE normal and getting out of their way! I’m grateful we met this wonderful young family who was willing to reach out to our two kids 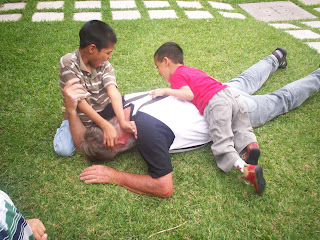 Dick doesn't do too badly
for someone his age! 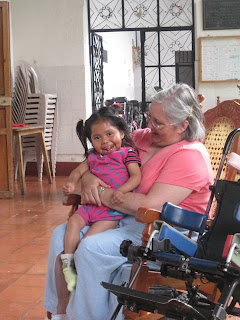 Having a more tranquil personality,
I opted for calmer activities. . .

When we got back to Hermano Pedro, Dick finally got to fixing Fidel’s chair, with Moi’s help as “tool handler.” I went and got Brenda and we just rocked and rocked and talked. She would just light up with the least bit of attention. 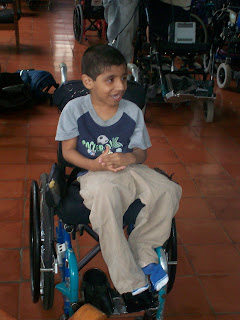 Dick then introduced me to Eduardo, a new boy at the orphanage. He literally looked like a tiny little waif, and almost appeared to be “shell shocked” in his responses. What happened next is one of my best memories from this trip. Ervin, whose nickname used to be “monster” wheeled over and tried to play with Eduardo. He didn’t get much more of a response than Dick and I did until he starting clapping, and Eduardo brightened and imitated him. Ervin kept this up, and Eduardo came out of himself more and more, even beginning to vocalize a bit. I haven’t seen him smile yet, but am hoping this will come if Ervin keeps “working” with him. I don’t think that there is anything that touches my heart more than to see these kids reaching out to each other. 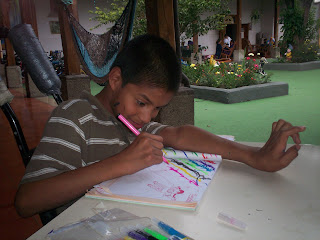 After helping Moises with his homework, it was time to head home. I still had a couple of errands to run and it was getting late. This was a full day, but a satisfying one. It seems every time I am here, each day is better than the last. After a day like this, I fall into bed exhausted, but I wouldn’t trade this exhaustion for a week in the Bahamas! 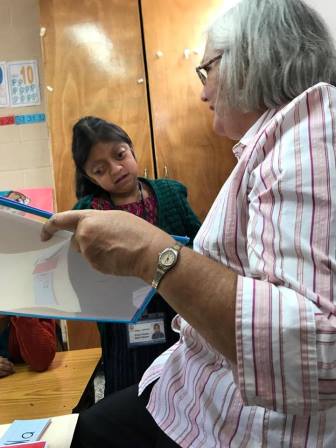 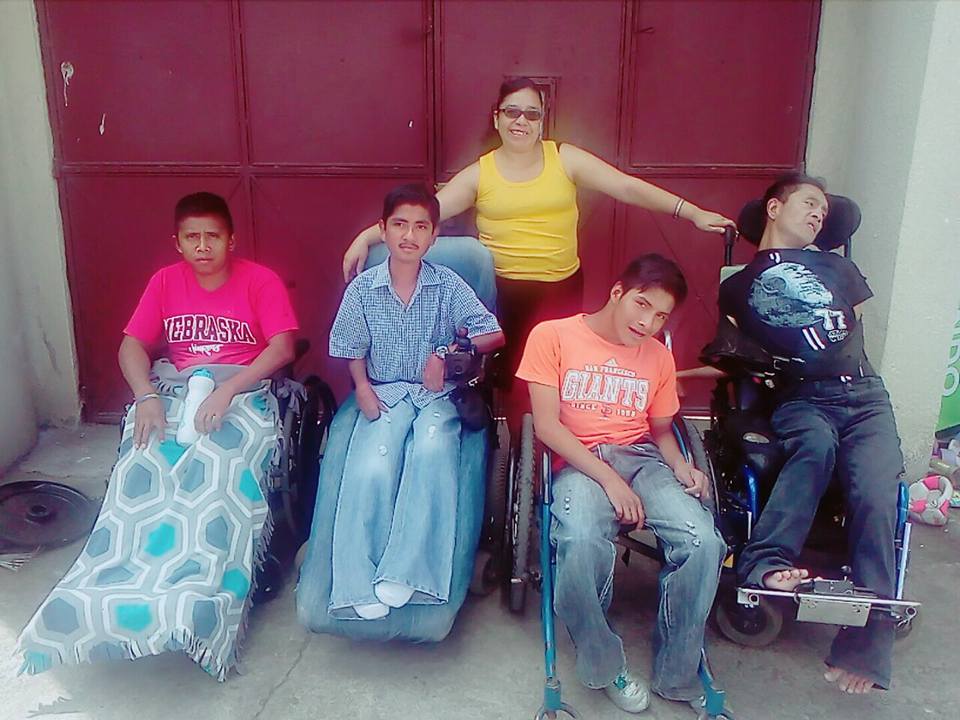 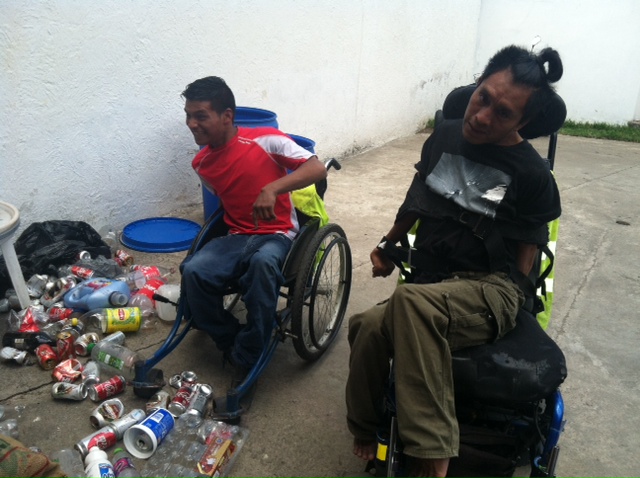 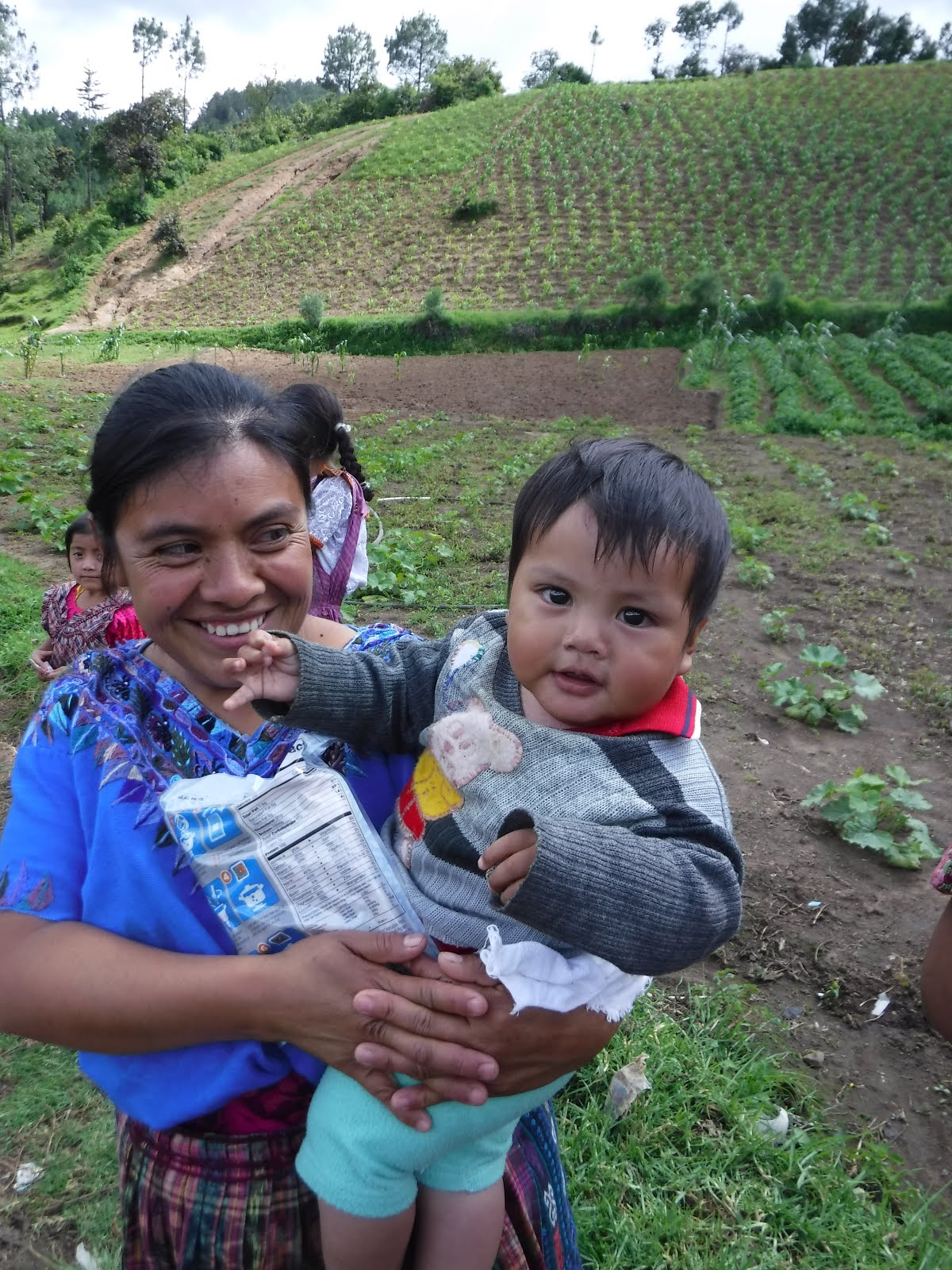